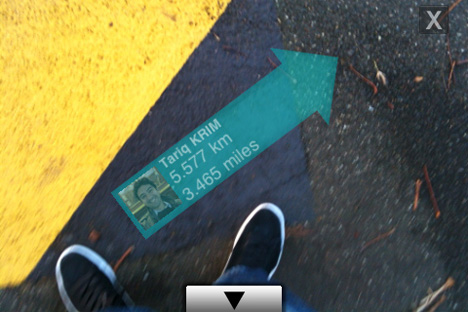 Twitter recently added a geotagging feature, so it was only a matter of time before someone made good use of it to create an iPhone app that would let stalkers, exes and nosy parents find their Twitter contacts. But Presselite did it with such style that we can just about forgive how creepy it is. The app, called Twitter 360, uses an augmented reality interface to guide you to your Twitter friends based on their geotagged tweets.

Using the iPhone’s camera, the app creates an overlay atop reality on the user’s screen to show Twitter friends’ distances from the user. The friends’ avatars are displayed along with an arrow pointing in their direction. The app also works with Google Maps, giving a detailed map of all Twitter friends along with their locations. While it does seem to make stalking way too easy, we can see some benign uses for this technology, like picking out friends in a crowd or finding your way to the bar you’re meeting a buddy at.