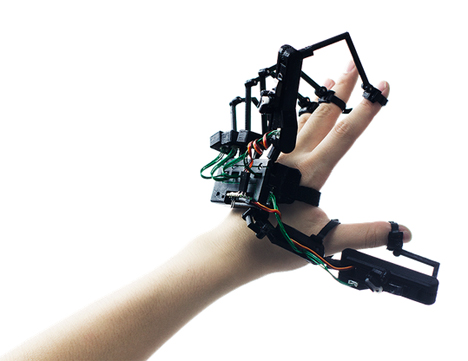 In the march toward readily-available, affordable, and playable virtual reality (or at least augmented reality), sight and sound aren’t the only factors that need to be considered. Moving around in a virtual world is important, too – and of particular importance is being able to manipulate objects with your hands. 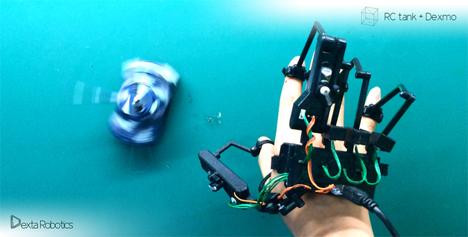 Chinese company Dexta Robotics developed its impressive hand-mounted exoskeleton for use in virtual reality or as a real-world controller. The Dexmo comes in two configurations: the classic lets you interact in VR environments or control robots and objects in real life, and the F2 does the same but includes haptic feedback.

The Dexmo isn’t the sleekest bit of hardware we’ve ever seen, but that’s okay – the designers have been more focused on actually making it work. In the many demonstration videos published by the company, the Dexmo does indeed seem like a highly capable device in hand motion capture. 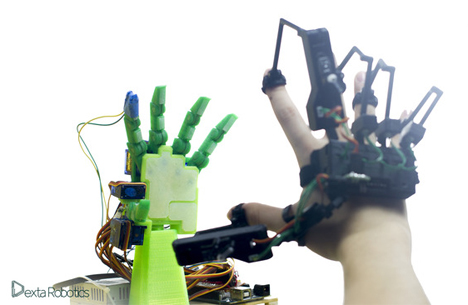 The team behind Dexta Robotics considers themselves a “group of hardcore roboticists.” They developed Dexmo as a kind of ground-floor motion capture device for robotics and VR. To make the VR experience heavier on the “R,” they also added in force feedback which basically applies backward pressure to fingers “holding” a virtual object, giving the haptic experience of actually holding that object.

When used as a controller, the Dexmo can command remote control gadgets, household objects, music mixing, and even mechanical arms used in bomb disposal robots. 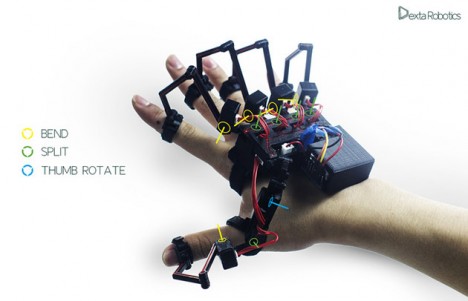 After 17 iterations of the Dexmo, the Dexta team has introduced the project to Kickstarter to gather funds for manufacturing. They work on the “Designed for Manufacturing” model, which means that they’ve already talked to manufacturers and made sure that what they want to do can be done, which should protect them from the real-world obstacles that hit a lot of promising Kickstarter projects.

See more in Cybernetics or under Technology. November, 2014.