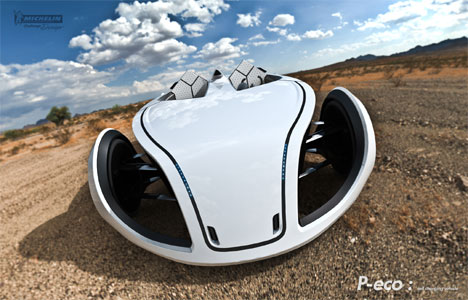 This odd-looking car is an interesting concept from industrial designer Jung-Hoon Kim and was an entry in the 2010 Michelin Challenge Design competition. Unlike other electric cars that rely on special charging stations or an extension cord plugged into an outlet at home, the P-Eco relies on four piezoelectric devices to charge the car’s battery as it moves. 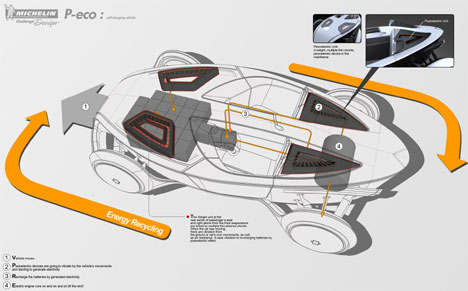 Kim’s idea behind the P-Eco was that cars waste a great deal of energy that could be harvested for good use. Every moment that a car is moving, it’s bouncing and vibrating…and those movements could be harnessed by piezoelectric devices to generate electricity that could recharge the battery. With piezoelectric devices located on both sides of each passenger seat, this concept car could keep itself running efficiently with no additional expenditures for electricity or gasoline. 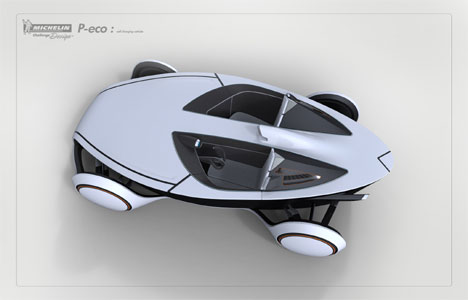 The car would obviously need another source of energy as a back-up, especially when it sits idle for a while. But it would be easy enough to simply charge the battery from grid electricity at home, then let the motion of the car keep it charged while you’re on the road. The entire concept relies on the future efficiency of piezoelectric devices, making it somewhat unreasonable for production today – but some day, those bumps in the road could actually be a good thing.

See more in Cars & Trucks or under Transportation. March, 2010.