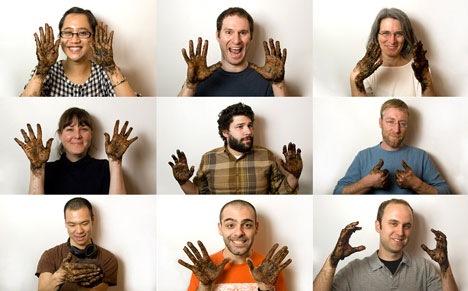 Remember the primitive satisfaction of playing in the mud when you were a kid? Sure, it was messy, but it was also undeniably fun. Tom Gerhardt, a designer and software developer, wants to bring that visceral satisfaction to grownups through a weird and wonderful computer interface that he calls Mud Tub. It is, appropriately, a tub full of mud – but far from being a useless container full of wet dirt, it’s a computer interface that removes the cold, inorganic rigidity of most digital interactions and replaces it with fun squishiness.

The Mud Tub doesn’t only remove rigidity in the tactile sense; it also boasts no specific functions associated with specific gestures. In other words, people who play with the Mud Tub create their own interactions by manipulating the mud in different ways. The organic interface allows users to act in a way that feels natural to them while controlling a variety of games and other applications, returning the fun and a sense of wonder to computing that most of us have been missing for quite some time.

See more in Computers or under Gadgets. August, 2010.