No matter how small devices get, you still have to get a speaker near your ear and microphone near your mouth, which generally requires a certain minimum dimension unless your fingers can do the talking while you’re walking.

The Sngl taps into a wristband and turns your fingers into the receiver, requiring no speaker on the device. Audio is directed to the ear via vibrations through your body while you talk into the band. 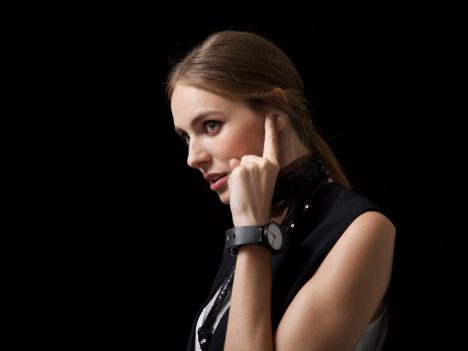 While you can wear it as a wristband, the device also doubles as a watch strap (for conventional or smart watches) so you can tie it right into another wearable you already carry with you – one less device!

The project comes from Innomdle Lab, a startup that’s been spun out of Samsung. Eventually something like this could be tied into a smartwatch design completely, but for now at least you can wrap your wrist and look like a secret agent while you talk on the phone (or a new-fangled Inspector Gadget).

“There’s no one who never lost their earphone in their lifetime. With Sgnl, you can keep your cell phone alone in your pocket and simply raise your hand to answer a phone call without carrying any extra headset or earphone. When you place your finger to your ear, your finger not only transmits the sound but it also blocks out background noise. So you can hear very clear voice in a loud places without worrying about other people listening in.”

See more in Phones & Mobile or under Gadgets. October, 2016.