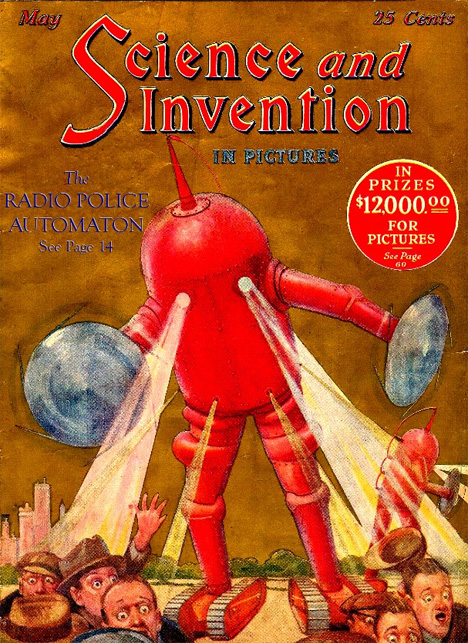 Hugo Gernsback is known as one of the founders of science fiction, and his predictions and imagined gadgets were unlike anything the world had ever before imagined. One of his best-loved subjects was robots, though in the 1920s they were more commonly known as “automatons.” This conceptual radio-controlled police automaton was dreamed up by Gernsback in 1924 as the next generation of law enforcement. The wacky design was supposed to be a towering, bullet-proof monument to authority and crowd control. 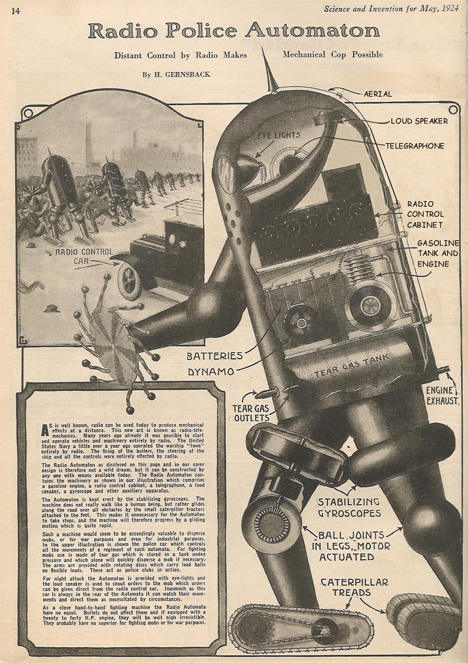 Gernsback’s Radio Automaton would have been controlled from a remote location via radio waves. Its locomotion was achieved through jointed knees and feet equipped with caterpillar tracks. The internal design would have included a gyroscope to keep it upright along with a gasoline engine and a loudspeaker. Where it really gets scary, though, is the weapons. Each arm of the robot included lead balls attached to rotating disks which were meant to be used as “police clubs.” Pressurized tear gas was stored in the body to be dispensed through a curiously phallic nozzle. Gernsback saw them controlling unruly mobs and fighting wars, but of course, the ill-fated Radio Automaton went the way of most other robot designs of the early 20th century.

See more in Retrofuturistic or under Vintage & Retro. June, 2011.