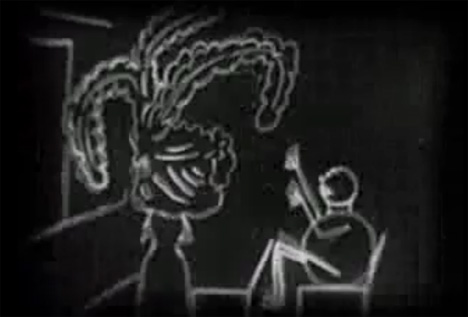 Animation has a rich history, not only in America but all over the world. Pioneers like Walt Disney helped to popularize the technique, but animation was making a splash well before Mickey Mouse ever took his first on-screen stroll.

The earliest surviving example of American animation is this modest little clip by J. Stuart Blackton. Filmed in 1906, the animation is called Humorous Phases of Funny Faces, and it features the artist’s arm drawing the characters that then come to life and perform for a few amusing minutes. Blackton used chalk drawings and cutouts to simplify the animation process and to provide some familiarity to the viewer; at the time, chalkboard caricatures were popular among vaudeville performers. The process Blackton used to “animate” the drawings was not the glass-plate system that later became the standard, but the short is still an “animation” in the sense that it uses a series of single exposures of drawings to simulate movement.

This animation from 1908 might be the earliest example of true animation as we came to know it later. Fantasmagorie was drawn by French artist Emile Cohl and, like the first animation above, uses a chalkboard theme. Unlike Humorous Phases, however, Fantasmagorie only appears to be drawn on a blackboard. The drawings were actually made with black ink on white paper, then shot in negative to make them appear as though they were drawn in chalk on a black chalkboard. It’s incredible to look at this animation and then a modern, computer-rendered animation and consider that the technology of entertainment has progressed that far in a little over a hundred years.

See more in Vintage Videos or under Vintage & Retro. November, 2011.