10,000+ Subscribers
Forehead Texter Lets You Be Sneakily Rude at Parties 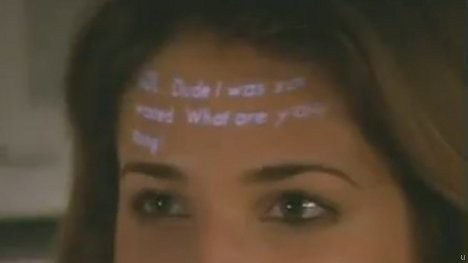 We’ve all experienced that uncomfortable situation: you’re at a party or in some other social situation, but you’d really like to be somewhere else. So you text your friends, looking for something better to do or getting the scores from that day’s game. But that doesn’t sit well with the people you’re actually with; they seem to think that your texting while you’re talking to them is rude. So Demetri Martin (of Comedy Central’s “Important Things with Demetri Martin“) came up with a fascinating solution: the Forehead Texter.

You just text as usual, being careful to aim the phone’s projector at the forehead of the person you’re talking to. Whatever you’re typing appears in bright letters on their forehead, leaving you able to carry on an interesting conversation with someone who’s not there while having a (probably) boring one with the person right in front of you. All you need to do is be careful to keep it out of their eyes – then they’ll know for sure something’s going on (if your relentless typing wasn’t a clue). Of course this awesome gadget isn’t real, but those of us who can’t seem to stop texting even for a few minutes desperately wish that it was.

See more in Phones & Mobile or under Gadgets. February, 2010.