10,000+ Subscribers
Fly Like the Wind: Jetpack Helps You Run a 4 Minute Mile 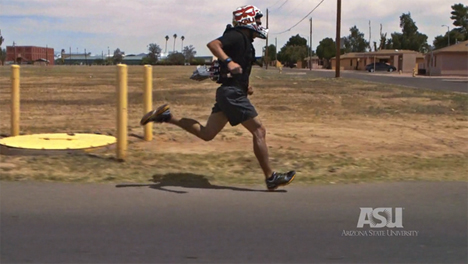 Runners are always chasing that elusive four-minute mile, and with good reason: it represents a great deal of dedication and physical training. Jason Kerestes, a student at Arizona State University, is working with DARPA to help regular people reach that insane goal. He hasn’t discovered a new way to train or invented a great new pair of shoes – he built a jetpack.

When we think of jetpacks we usually picture them helping us fly far, far above the ground, but the 4MM (4 Minute Mile) is designed to give runners a horizontal boost. In tests, it helped an already-fast runner shave 18 seconds off of his mile time. That may not sound like a lot, but the jetpack itself added 11.2 pounds to the runner’s torso, so the overall effect is greater than it seems. 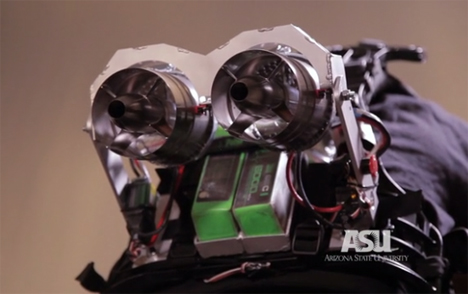 The dual-jet, lithium-ion battery powered prototype still has a lot of revisions and refining ahead of it. Its ultimate intended goal is to help military troops haul ass out of dangerous situations. In a combat zone or other dangerous situation, even 18 extra seconds could mean the difference between life and death. Using the jetpack also decreases metabolic energy expenditures so runners could potentially run for longer times and distances than would be possible on their own.

See more in Cybernetics or under Technology. September, 2014.