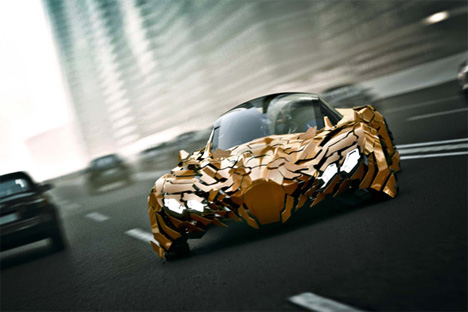 One thing many people don’t realize about designers is that they don’t always mean their concepts to be made into reality. Sometimes, a radical concept is only meant to be a jumping-off point for more feasible designs. That is the case with Project Flake, a completely impossible car concept from Da Feng that looks way awesome, but would never actually work as a real-world car. 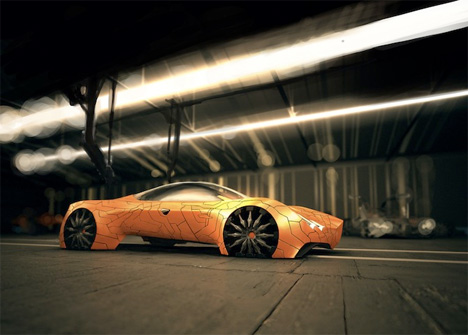 Project Flake features dynamic movable micro-spoilers made of carbon fiber. Each spoiler is hinged so that it can move independently to reduce air resistance and improve performance or act as an air brake. The spoilers can lie completely flat against the car or stand straight up as needed to increase or decrease drag. 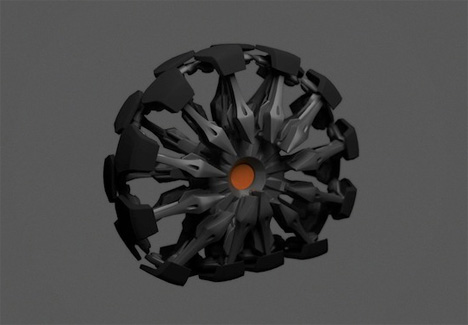 But even odder than the moving spoilers are the bizarre wheels. Each wheel is made of twelve legs which adjust their length according to speed and the road surface. At high speeds the wheels are rounded on top and flat on the bottom, so Da Feng calls them D-Wheels. The unique design allows them superior traction – so much, in fact, that the designer believes the car could be used as an off-road vehicle.

Obviously, this design is not a serious concept car that could be seen on the streets any day now. According to Feng, he intends the design as an inspiration for other ideas. We love both the ambitions of the outlandish design and the honesty of the designer responsible for it.

See more in Concept Vehicles or under Transportation. August, 2011.