10,000+ Subscribers
Fatal Fail: 3 Inventors Killed By Their Own Inventions

Inventors often put themselves in the line of danger to create new and useful things. But none have paid a greater price than these inventors who all died as a direct result of the very existence of the things they created. Above, William Bullock was the American inventor of the rotary printing press. His revolutionary design would forever change print media, but he wouldn’t live to see its full effects. On an April day in 1867, Bullock kicked one of his machines in frustration. His foot was caught in the machinery and severely mangled. The injury developed gangrene and Bullock died while his foot was being amputated. 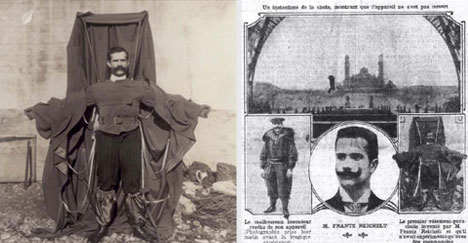 In the late 19th century, personal flying inventions were all the rage. Unfortunately, none of them were as effective as their inventors would have hoped. This poor track record is wonderfully demonstrated in the tale of Franz Reichelt, a tailor who claimed to have invented an overcoat that would function as a parachute. Prior to his first test of the coat, Reichelt informed authorities that he would use a dummy to demonstrate its function by throwing it off of the Eiffel Tower. Unfortunately, Reichelt was a little overly enthusiastic and decided to test the coat himself. He, of course, fell to a gruesome and instant death when the coat failed to work as expected.

Thomas Midgley, Jr. is sometimes said to have had more impact on the Earth’s atmosphere than any other living organism due to his inventions: namely, lead gasoline additives and chlorofluorocarbons. However, Midgley wasn’t killed by these inventions which we now know to be exceptionally harmful. He met his maker thanks to a bed that he created after contracting polio and becoming bedridden at the age of 51. The bed featured a complex system of ropes and pulleys to help Midgley’s attendants get him out of bed…ropes which eventually strangled him.