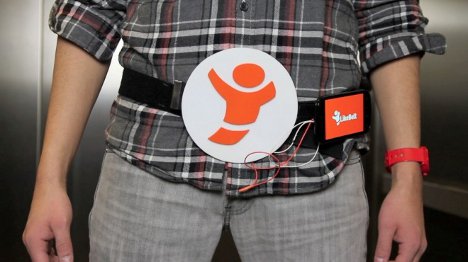 Generally speaking, thrusting your pelvis in the direction of something to indicate that you like it is not socially acceptable. This fun piece of hacked hardware called the LikeBelt makes it not only acceptable, but almost charming. Using NFC (near field communication) technology, the LikeBelt allows wearers to perform hip thrusts in the general direction of things or people that they want to share with friends on Facebook.

The LikeBelt was engineered by DeepLocal and uses the currently-underused NFC technology to post directly to Facebook. NFC is used very sparingly right now as a real-world purchase platform for Google Wallet and a few competitors. It’s not very widespread at the moment but a few cellular devices are equipped with it – and the LikeBelt uses one of those, the Nexus S. When the belt interacts with an NFC chip (which could be placed pretty much anywhere), the wearer’s Facebook profile gets an update. 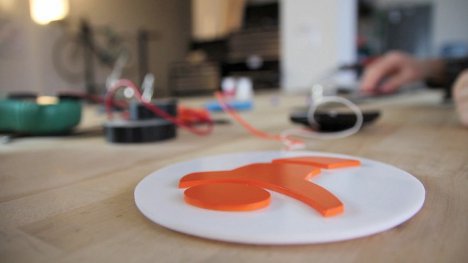 DeepLocal doesn’t intend on producing the LikeBelt for sale, and they also don’t mean it to be taken as a serious product. Think of it as wearable social satire. Humping the things, people and places you like in order to let your circle of friends know that you like them – that’s pretty funny. But if NFC takes off and becomes much more widely used, something like the LikeBelt (but not necessarily involving pelvic thrusting) could be a serious way to share with friends.

See more in Do It Yourself or under Technology. January, 2012.