10,000+ Subscribers
They’re the Bomb: 5 Awesome Toys From the Atomic Age 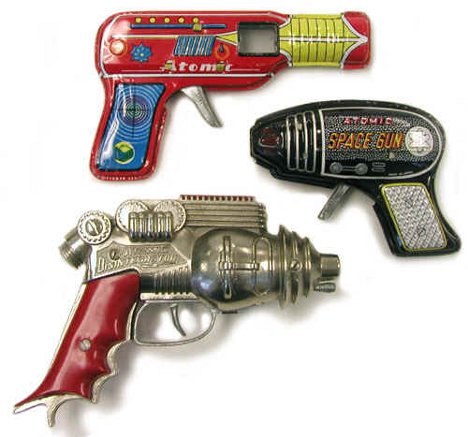 Atomic power is like the unpopular kid on the playground these days, so it’s easy to forget that it was once the superstar of the energy world. Around the 1940s and 1950s, kids were encouraged to learn about atomic energy and even play with atomic-themed toys. The guns above didn’t use any real atomic power, of course, but they were labeled as “atomic” and marketed toward kids in the 50s and 60s. 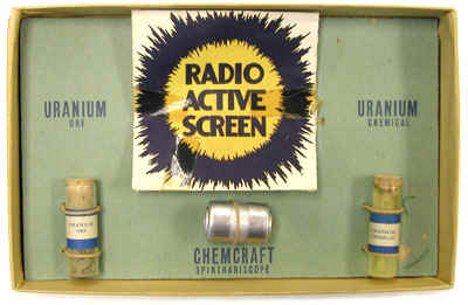 But there were more reality-based atomic toys as well. The above Atomic Energy Kit came with tiny amounts of uranium and “uranium chemical” as well as a piece of paper imbued with a low concentration of radium. Along with the kit was an instruction manual that taught kids all about the fascinating subject of radioactivity. 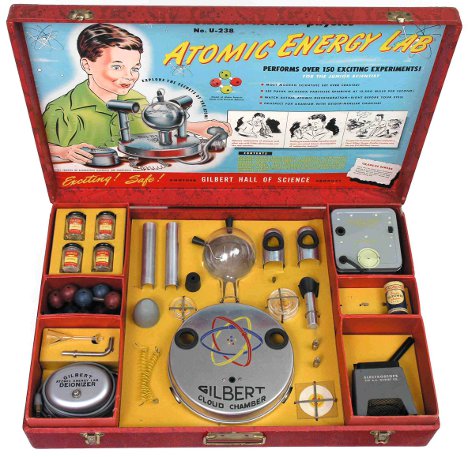 The short-lived Atomic Energy Lab from Gilbert Toys allowed kids to carry out simple experiments with a handful of materials like uranium ore, a cloud chamber and a Geiger counter. Thanks to its price and its complexity it was only produced for two years – but if you’re lucky enough to find one in good condition today it is worth its weight in uranium. 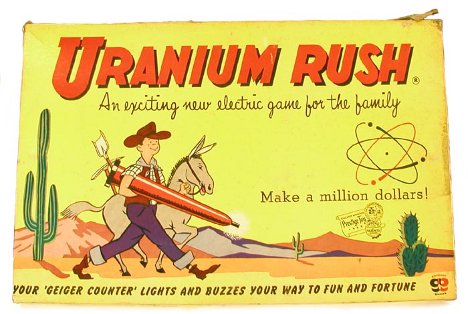 If you were lucky enough to be a kid in the 1950s you might have gotten to play the Uranium Rush board game. Gameplay involved moving to plots of land on the board and deciding whether to auction them off or test them for uranium with the enclosed toy Geiger counter. The player who amassed the most money by the time all of the plots were sold was the winner…and presumably learned a thing or two about its nuclear properties. 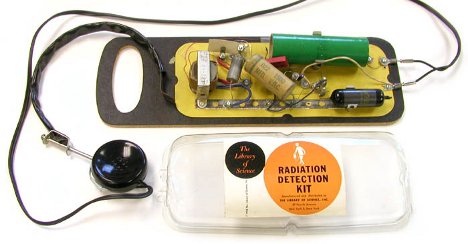 The Library of Science Radiation Detection kit came with an assembly-required Geiger counter and a small sample of uranium ore. A pair of pith balls were included so kids could make their own electroscope, an electrical measuring instrument. Given parents’ reluctance to expose their kids to radiation these days, this toy would probably never make it to modern toy store shelves.

See more in Retrofuturistic or under Vintage & Retro. January, 2012.