10,000+ Subscribers
Electric Concept Car With a Spring in its Three-Wheeled Step 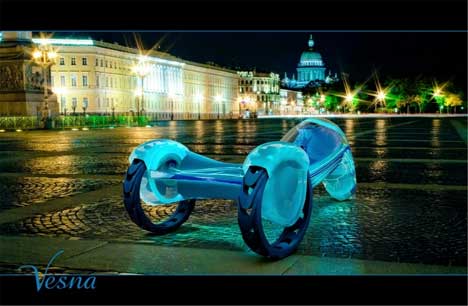 It’s clear that electric cars are ushering in a whole new era of automobile design. Without the constrictions of a huge internal combustion engine to work around, electric car designs are able to employ some truly unique features. Like this one from Russian auto designer Kristina Magnitskaya: it’s called Vesna (Spring) and Magnitskaya created it for the 2010 Michelin Challenge Design competition. The body is made of one single piece of natural resin with built-in wiring. 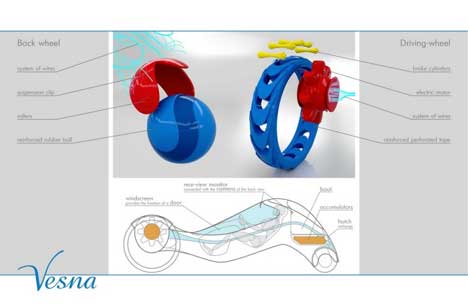 The wheels are arguably the car’s most prominent feature. The two large front wheels are the “driving” wheels, and they’re powered with small in-wheel electric motors. They resemble perforated rubber belts, and steering is accomplished by varying the amount of torque on each of the wheels. 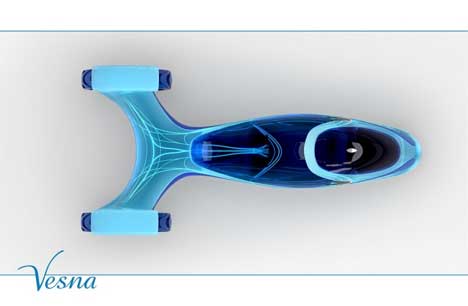 The single rear wheel is something entirely different. It’s essentially a ball, held in place with a four-petal suspension clip. Inside each petal is a roller which lets the rear wheel move freely. And because the entire clip is wired in to the car’s electrical system, braking and steering can be partially controlled with the rear wheel as well. 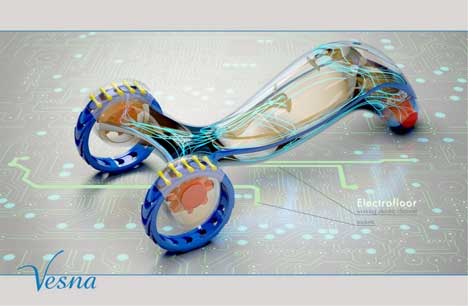 As for the batteries, they sit in the back of the car, just above the rear wheel. Just open the floor of the storage compartment to access them. Not that you’ll need to very often, because this concept car is charged by way of a special “electro-floor.” There aren’t many details about the special floor, but it looks like a special grid-wired series of cords and sockets for plugging your electric car into. Presumably, you’d have one of these at home also. 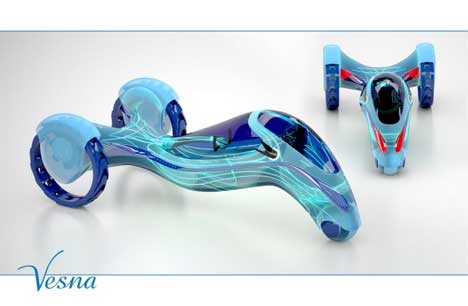 As cool and futuristic as this car looks, we can see there being a potential problem with the way the driver is situated in it. The single-person car holds the driver in a reclined position, with the huge front wheels partially obscuring their view of the road. Still, for sheer inventiveness and creative design, this concept is absolutely eye-catching.

See more in Concept Vehicles or under Transportation. March, 2010.