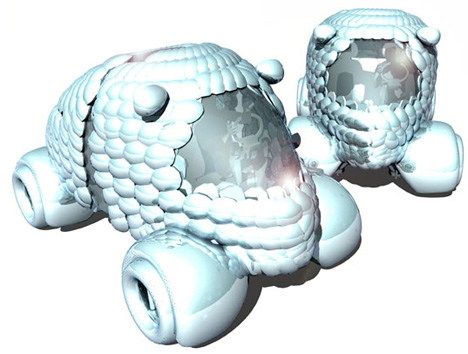 Cars are seen by many as a mounting problem: they create congestion in the streets, danger for pedestrians and other drivers, and a growing environmental impact. One of the holy grails of industrial design is coming up with a car that will solve all of these problems while still letting us get around with ease. Terreform‘s answer is to approach the car problem not from an angle of urban design or even transportation, but of architecture. 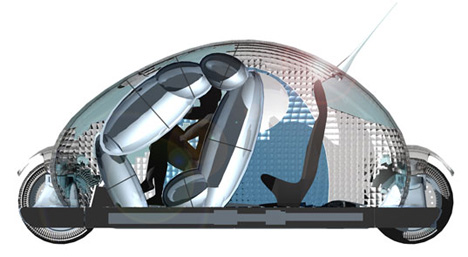 Discussed in length at Inhabitat’s 2007 Postopolis event, the S.O.F.T. (Sustainable Omni Flow Transport) Car design incorporates an entirely new way of thinking about transportation into a distinctive and decidedly unique car design. According to Mitchell Joachim of Terreform, we no longer need cars to be built of heavy, labor-intensive materials. The biggest reason we use them is to protect drivers from other cars, so if everyone simply drove vehicles made of softer, more environmentally-friendly materials, we wouldn’t need to put so much work into protecting ourselves from each other. 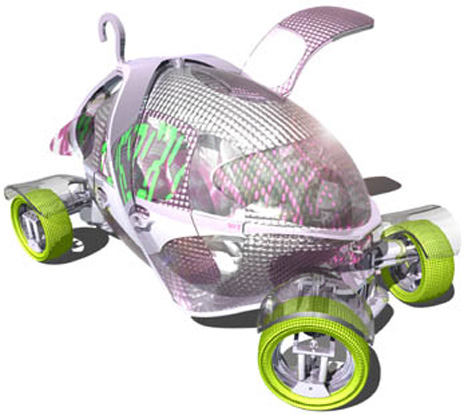 The concept cars are something of a revolution in the way we think about car ownership, as well. Cars would be shared – more like public transportation, but on a more personal level. Each car interacts with and responds to its environment, its driver, and other drivers in a way that current cars simply can’t. The “brains” of the car are taken out from under the hood and put into the omni-directional wheels, and programmed speed caps would help to keep pedestrians safe. 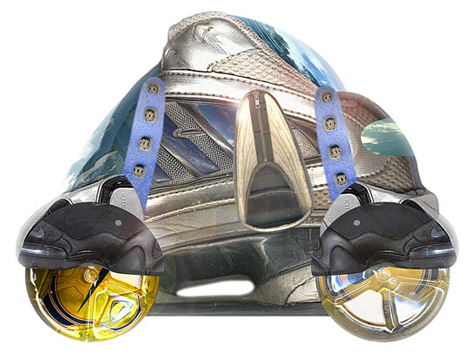 Of course, for such a large change to ever take place in transportation, it would have to take place simultaneously across the board. We couldn’t have some drivers in large metal cars and others in small, vulnerable soft cars. There is still the issue of inter-city travel, as well; traveling long distances at higher speeds would be much more dangerous than city driving, and a soft car wouldn’t protect the driver in the case of a rollover accident or collision with a deer on the highway. Still, changing the way we look at car design is the first step toward making cars that work with the urban environment, not against it.

See more in Concept Vehicles or under Transportation. December, 2009.