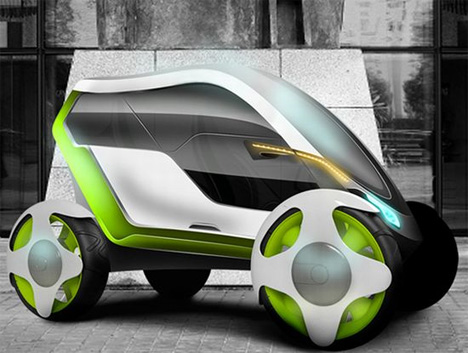 Futuristic city car concepts often involve reinventing the wheel, as it were: changing the entire infrastructure of roads to suit a new generation of smaller, more eco-friendly cars. While that would be a handy solution to some problems, it’s completely impractical. The cost to replace all of the streets in the world would be outrageously prohibitive. So we like to see concept cars that take the existing infrastructure and do something new and interesting within it. 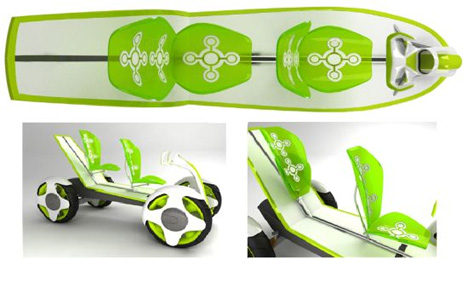 Brazilian designer Rafael Fernando da Silva came up with a concept he calls the “FLUR,” a two-seater city car that would seek to take some of the stress out of driving and some of the traffic out of the city. The ultra-narrow car would take up only half a lane of traffic, letting two FLURs drive side-by-side in one lane.

All of the systems in the FLUR concept are electronic, taking some of the decision-making off of the driver. There’s no engine to speak of since the FLUR is electric and driven by small motors in each wheel. The passenger would have to sit behind the driver rather than beside him as we’re used to now, but the back seat moves as needed and is foldable to provide extra storage room when there are no passengers. Overall, it would probably take a bit of adjustment to driving etiquette for cities to accommodate any ultra-small, lightweight car, but cities all over the world are already well on the way.