To a human, opening a door isn’t a difficult task. We can visually identify what type of knob or handle the door has, then through common sense (and trial and error) figure out how much pressure to apply while twisting, pushing or pulling. For a robot, though, these tasks are extremely difficult. So much goes into opening a door that it usually takes a pretty sophisticated set of components to make an effective door-opening robot. 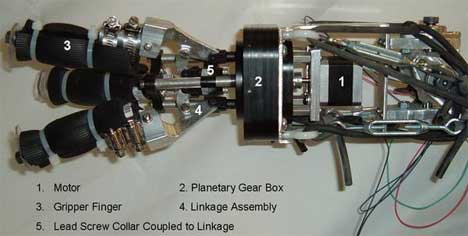 But door-opening robots are an enticing field for robotic engineers. People in wheelchairs often can’t reach or manipulate handles to open doors, making it very difficult to get around in a building without automatic doors. Several variations of the door-opening robot have been developed before, but they were so cost-prohibitive that most people wouldn’t be able to afford them. So a group of robotics students at the University of Massachusetts, Lowell, designed a cost-effective robot gripper to help wheelchair users who may not be able to afford the big-ticket gizmos.

Their gripper, called Dora (door-opening robotic arm) cost only $2000 to make and works on a single motor. It incorporates three plastic fingers that extend to grasp the door handle. Then the fingers hold onto the handle or knob while twisting, pushing or pulling to open the door. In tests, Dora was able to open doors with 14 different types of handles in 85 percent of tests involving pushing the door open, and 65 percent of tests involving pulling the door open. Future variations of the idea could include sensors and more actuators to improve functionality while still maintaining the low cost of the device.

See more in Robotics or under Technology. March, 2010.