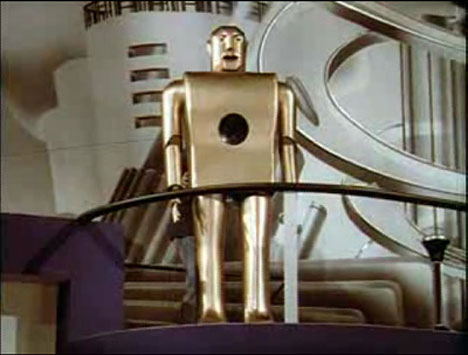 At the 1939 World’s Fair, New York was introduced to an incredible sight, the likes of which no one in attendance had seen before. Elektro, the seven-foot-tall, 265 humanoid robot made by Westinghouse Electric Corporation, wowed audiences with this shockingly advanced (for the time) abilities. The huge ‘bot could walk, talk (thanks to an internal record player) and even smoke cigarettes and blog up balloons. The video snippet below is actually a segment of the 1939 movie The Middleton Family at the New York World’s Fair, and it shows Elektro’s whole public performance.

After the World’s Fair, Elektro and his robot dog Sparko toured America, introducing people to the amazing wonders of Westinghouse’s engineering. The robot later starred in the raunchy movie Sex Kittens Go To College, after which its head was separated from its body and the pieces all stored separately. It wasn’t until 2004 that Elektro was mostly reassembled and put on display in the Mansfield Memorial Museum in Mansfield, Ohio – the town of its creation.

See more in Vintage Videos or under Vintage & Retro. January, 2011.