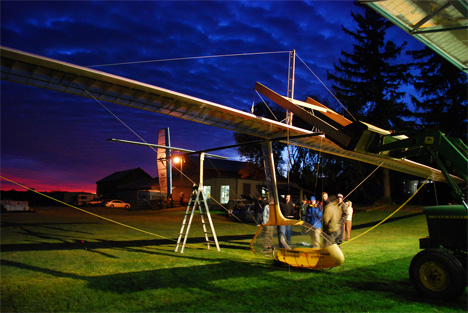 Flying was once the focus of every crazy inventor, from amateurs right up to the masters. We’ve conquered the skies since then, but there’s one thing mankind has never been quite able to do: build a human-powered ornithopter that can actually fly. The ornithopter has been envisioned since ancient times but was given a concrete (yet still theoretical) shape in Leonardo Da Vinci’s drawings. In the ensuing centuries, many have tried but none have succeeded at making a human-powered, wing-flapping flying machine that stays aloft for any impressive amount of time. But now a team at the University of Toronto Institute for Aerospace Studies has created an ornithopter that can do just that.

The PhD candidate who piloted the craft had to lose 18 pounds of his body weight just to fly the extremely light-weight vehicle. The ornithopter, dubbed The Snowbird, weighs only 94 pounds despite having a wingspan of 105 feet. The craft maintained its flight for a record-setting 19.3 seconds, flying a length of around 475 feet. 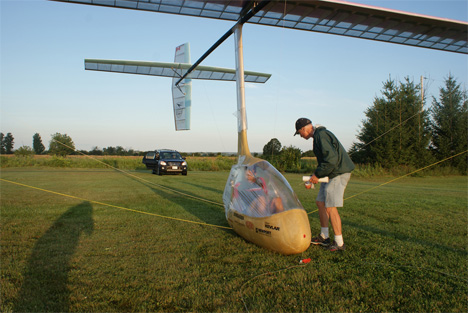 This flight marks the first time that such a craft has maintained both speed and altitude for such a long time. The team realizes that the ornithopter isn’t a practical means of everyday transportation; they were more focused on inspiring others to undertake what they might see as impossible. So while we won’t see accountants pedaling ornithopters to work anytime soon, maybe we are in for a flood of new people-powered flying machine designs and trials.