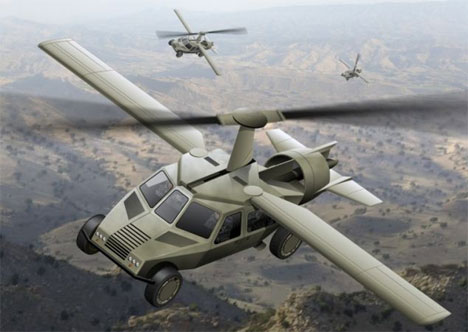 The elusive dream of the flying car is still alive and well with designers who just can’t seem to get over the idea. Now, DARPA is sinking more than $60 million into a multi-purpose flying vehicle called the Transformer. The weird automobile looks like a cross between an armored Humvee, a helicopter and a light airplane. It is meant to be able to drive across all types of terrain and then take off – without need for a runway – to simply fly above dangerous obstacles. The car’s ability to fly could help soldiers avoid explosives and make their movements less predictable to enemies. Because it can take off and land virtually anywhere, it could be an invaluable tool in getting wounded soldiers off of the battle field and to medical help quickly. 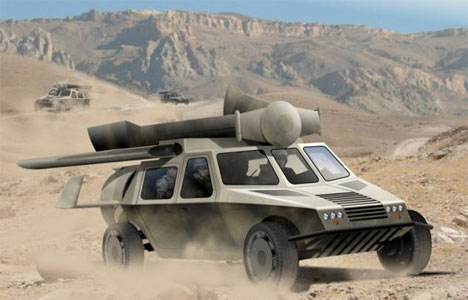 The vehicle’s specifications read like a kid’s ideal G.I. Joe toy: it’s equipped with heavy armor, machine guns and cannons. It sports rotor blades which pop up and fold down at the touch of a button. It can be operated by anyone, even those with no pilot qualifications, thanks to simple automatic flight controls. The vehicle is somewhat similar to the Terrafugia, the long-awaited commercial flying car currently in development. In fact, the Terrafugia team has been asked to help produce a prototype of the Transformer, which could be available and on the battlefield as soon as 2015.