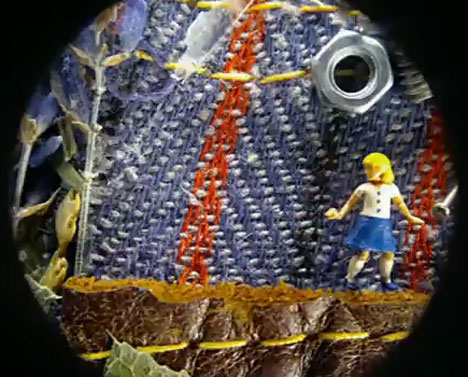 We use our cell phones for everything these days, but the hands-down coolest thing a cellular phone has been used for is this, the smallest stop-motion film ever made. Using a Nokia N8 smartphone combined with a CellScope (a cell phone-mounted microscope), the people who brought Wallace & Gromit to life created a new adventure: that of Dot, the .35-inch-tall girl. Aardman Studios animators used a 3D printer to create Dot, making her as small as the printer was capable. Rather than a movable, moldable model like traditional stop-motion animation uses, the film uses 50 different models of Dot. That’s because she is too tiny to move around into different poses.

Every itty-bitty Dot model was hand-painted by artists who had to look through microscopes and use tiny tools to get the colors just right. Then Dot was filmed running through her microscopic world, escaping from unraveling fabric, jumping over obstacles and even riding a bumblebee. And in true Aardman fashion, she makes the best of her situation at the end and knits the threatening threads into a comfy sleeping bag. Not bad for someone tinier than the common housefly.

See more in Art of Tech or under Technology. September, 2010.