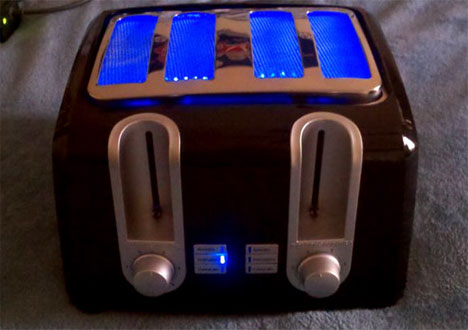 The lowly toaster is one of the appliances that we tend to neglect because, well, as delicious as toast is, making it isn’t exactly exciting. This inspired mod, however, turns the toaster into an unlikely gaming machine. A four-slice toaster is mashed up with an Xbox 360 and some awesome blue LEDs, resulting in the XToaster 360.

The guy behind the strange mod goes by the screen name ncaruso11. The XToaster 360 may be bigger than the non-modded 360 and it may not actually make toast, but it’s one of the most creative ways we’ve seen to smash together a kitchen appliance and a gaming console. Actually, it’s possibly the only kitchen appliance/console mod we’ve ever seen.

Unfortunately, the disc doesn’t pop out of the bread slot on the toaster – that would surely push this project over the edge and take it from cool to unbelievable. But it still manages to play discs just as well as any other XBox 360, and it’s an undoubtedly creative use of an otherwise-humble household appliance.