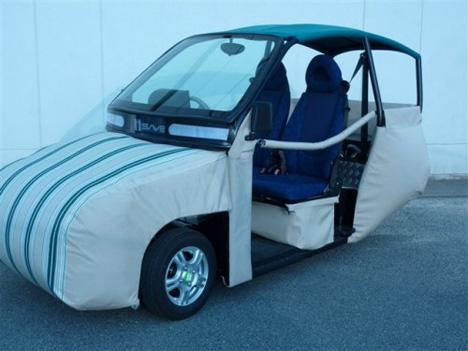 We know that there are some people who value safety way more than style, and we salute their sense of responsibility. But you have to draw the line somewhere. This pillow-encased electric car is probably way on the other side of that line, having gone from safety-conscious to ridiculous right about the time the designers decided to give it only three wheels and then cover it in airbags.

The iSAVE-SC1 was designed by a Japanese company called Humanix with help from Hiroshima University. It is reportedly the safest car in the world, but we’re guessing that has less to do with the surrounding air bubble and more to do with the fact that its top speed is a mere 31 MPH. Judging from the video above in which three men are repeatedly struck with the car and suffer nothing more than a case of the giggles, it’s safe to say that collisions wouldn’t be a problem in this tiny vehicle. But would you really be seen driving it?

See more in Cars & Trucks or under Transportation. October, 2011.