10,000+ Subscribers
Augmented Reality Toy Turns You Into a Bargain-Bin Ripley 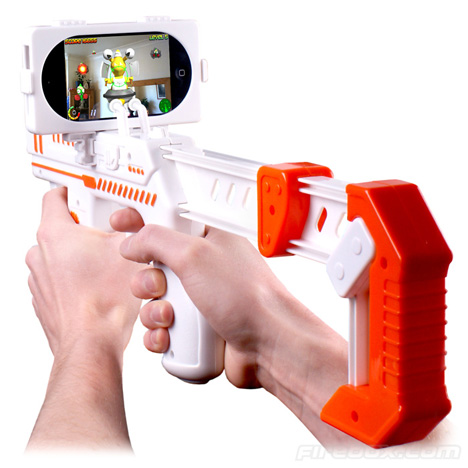 Augmented reality games are nothing short of spectacular, and we’ve had a ton of fun playing with the Nintendo 3DS AR game cards. But there’s something missing from those mini-games. Is it a dorky-looking plastic gun? Is it murderous aliens? Is it the thrill of stalking said aliens through your entire house with that dorky-looking plastic gun? It just might be all three.

That’s why we’re pretty psyched to see the AppToyz Blaster. It is indeed a little plastic gun that cradles your iPhone (or 4th generation iPod Touch), then uses its camera + a proprietary app to create a killing field that’s positively packed with hostile aliens. It’s your job to track them down and shoot them while collecting power-ups and special weapons everywhere you go.

As a nod to classic arcade shooter games, you tilt the Blaster back to reload it. The gameplay looks a tiny bit choppy, but what do you expect? It’s the future and we’re playing augmented reality games, for goodness’ sake. For around $32 (plus shipping from the UK) you could start spending Saturday nights hunting down and dispatching aliens all over your house or neighborhood.

See more in Gaming & Geek or under Gadgets. September, 2011.