GPS devices have become so widespread and popular that some people find it impossible to get around without them now. But will the trend continue and will navigation systems keep getting more and more sophisticated and involved? A group of researchers at MIT are counting on it. Their AIDA (Affective Intelligent Driving Agent) 2.0 system overlays a gigantic 3-D map on the car’s dashboard to guide the driver at every twist and turn on their route. 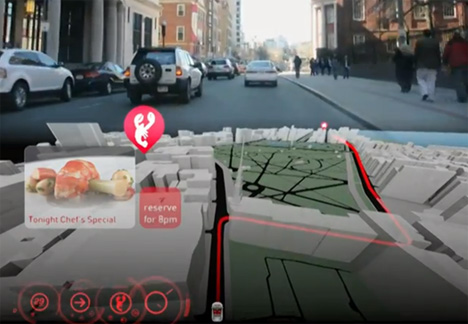 But navigation alone would be boring. The AIDA 2.0 also gives you details on surrounding businesses, like that seafood restaurant you like on the next block. Oh look, they’re having a special tonight! The display shows your car’s progress through the 3D map, and the display even extends to the car’s mirrors. Check out the great Old Navy coupon that just popped up on the display! And then, presumably, comes the distinctive “CRUNCH” sound of you smashing into the rear end of the car in front of you.

It seems like a terrible idea to put so much distracting information in front of a person who is trying to drive. To the system’s credit, it is controlled by gestures rather than a console so the driver wouldn’t have to look down at a screen to control it. But there is still the matter of putting an interesting cartoon-like illustration in front of a person who should be watching the road. Many of us would be so distracted by watching the progress of the little car on the map that we would completely space off looking up at things like traffic, pedestrians and obstacles.

See more in Cars & Trucks or under Transportation. May, 2011.