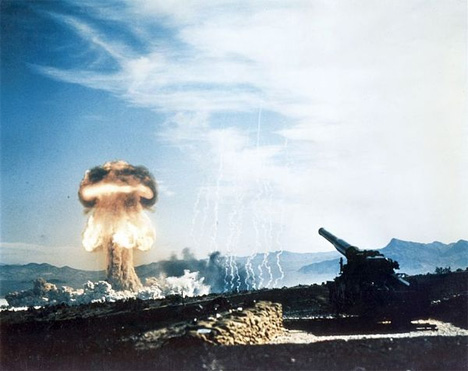 War is often more terrifying in hindsight. This is especially apparent in the Cold War-era mega-artillery cannon aseptically named “Atomic Annie.” Created during those especially paranoid years of the Eisenhower administration, it was a weapon capable of “wiping out an enemy division.” 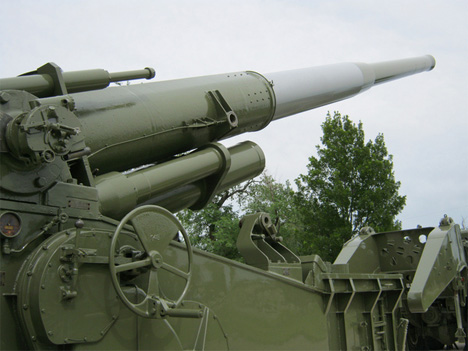 That disturbing quote is pulled from a commemorative plaque embedded in a rock that sits beside Atomic Annie, the only weapon of its kind to fire a nuclear round, at Fort Sill. (In a macabre and bizarre side story, the Atomic Annie that fired the shot was first lost, then during transport across Germany, it tumbled down a cliff and killed two soldiers.) The gun is an 85 ton, 84 foot long monolith with a 10 foot, 280mm barrel. It was capable of firing its nuclear artillery 20 miles.

On May 25, 1953, the first and only shot was fired and “exploded on target with a roaring violence equal to 15,000 tons of TNT.” Twenty of the cannons were produced but luckily none were used. The rhetoric used on the plaque beside Atomic Annie at Fort Sill best exemplifies the machismo-laced arrogance of war: “[the] milestone in military history and in the advancement of nuclear weaponry erupted in a churning mass of heat and flame that surrounded the core of the atomic fireball.” It’s a perfect example of how grandiose the ego of man can become.

See more in Vintage Videos or under Vintage & Retro. July, 2013.