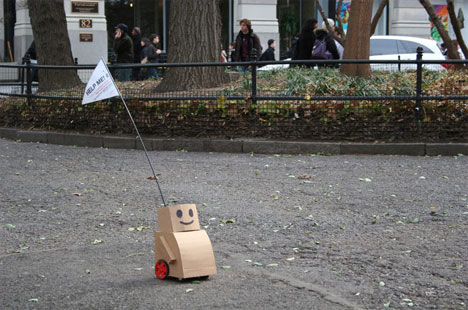 What would you do if you saw a happy-looking cardboard robot rolling toward you in a public park? Would you be scared or curious? NYU student Kacie Kinzer wondered how the public would interact with a tinyÂ anthropomorphic ‘bot, so she set one loose in New York to find out. 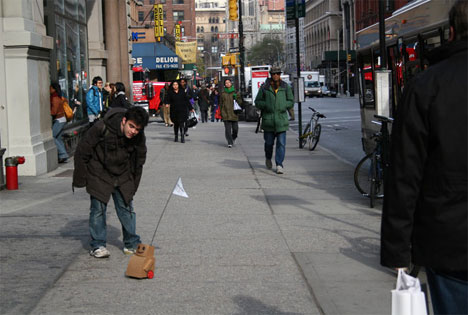 Kinzer’s Tweenbot is a small cardboard robot with a smiling face and a jaunty flag sticking out of his back. The flag displays a destination, which the robot is dependent on humans to help it reach. For the first Tweenbot trial, Kinzer set the ‘bot down at one end of a park (its destination was at the opposite corner) and set about taping its human interactions with a hidden camera. 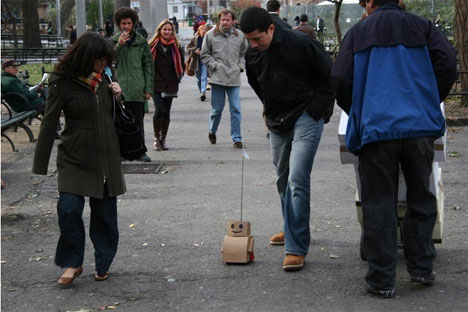 The results were surprisingly tender. People seemed to genuinely care about the tiny cardboard mecha-man, guiding it away from danger and helping it get to where it needed to go. Everyone who saw the Tweenbot seemed enchanted by it, though some avoided actually approaching it. Since the bot can only move forward and isn’t equipped with any kind of navigational abilities, it is completely dependent on the kindness of human strangers to help it get where it needs to go.

The reactions from the humans who encountered the Tweenbot were heartwarming, especially considering that the trial took place in New York City: a place where people are said to be completely wrapped up in their own little bubbles. Surprisingly, no one reported the little robot as a possible bomb – rather, they simply read his note, pointed him in the right direction and went about their day.

See more in Robotics or under Technology. June, 2010.