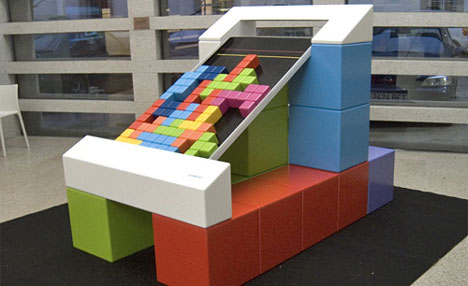 The original Tetris is made of awesome, but we have to admire this real-life version using plastic blocks and an angled table. Tetris Analogico, or Analog Tetris, is of course based on the classic video game with a few big differences. First, the goal of this physical Tetris game isn’t to clear rows by filling them up with tetrominoes; it is to build as solid a structure as possible up to the yellow line on the game board. Maybe even stranger is the fact that a dealer – wearing a cute little visor, no less – slides the blocks down the playing surface to the player.

The players in this video look way too nervous for people who are just playing Tetris, but they are preparing to play in the first Analog Tetris world championship, which would give anyone reason to sweat. The game is both an analog version of the Tetris video game and a nod to the meatspace origin of the video game: a slight more complicated game known as pentominoes.