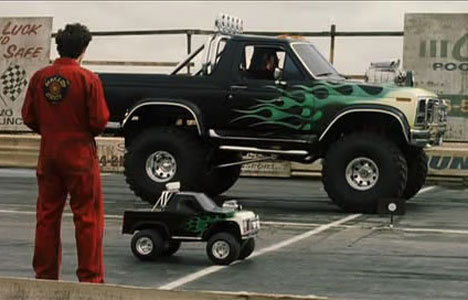 Trying to disable a fleeing car usually requires a fair bit of planning ahead and some danger for everyone involved. In 2009, the Department of Homeland Security developed a system called SQUID (shown in the video below) to immediately and safely stop an uncooperative vehicle. The SQUID tangles itself up in the vehicle’s wheels and stops it quickly without causing any permanent damage to the vehicle. But while the SQUID was meant to replace the dangerous tire shredder strips typically used by law enforcement, it shares their major flaw: both devices have to be pre-positioned and run over by the target vehicle.

In a bid to solve this problem and come up with an affordable vehicle-stopping solution that causes no damage, the Air Force Research Laboratory posed the problem to the public in March 2011. They received one standout entry: a super-fast remote-control car that drives under a fleeing vehicle and deploys an airbag to lift the vehicle and stop it in its tracks. With the ability to reach 130 MPH within 3 seconds, the RC car has the potential to catch up to almost any car or light truck and stop it without causing permanent damage or putting law enforcement officers’ lives in danger. Plus, come on – this has the potential to be the funnest law enforcement tool ever.