10,000+ Subscribers
What’s it For? Kids Confused by Antique Technology Objects 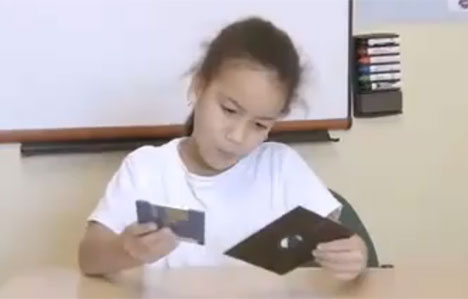 If you have kids, you have no doubt experienced the amusement of watching them try to figure out unfamiliar items. They can make you feel rather old, though, when they find your box of old cassette tapes or Gameboy games and have absolutely no idea how to use them. This video of French schoolchildren being perplexed by vintage technology has been making the rounds online for a while, but it’s so precious that it deserves another look even if you’ve seen it before.

The kids are presented with a bunch of technology that they have probably never seen before: computer disks, a record player, an old Gameboy, video game cartridges and a wealth of things that simply don’t exist in their current forms in today’s world. They are totally bewildered by most of the items, turning them over and over in their hands like alien technology. They illustrate an interesting point about technology: take away the familiarity that comes from experience and almost none of our gadgets are intuitive. More importantly, the gadgets that every kid and most adults knew how to use just 30 years ago are now so archaic and alien that today’s kids have absolutely no idea what they’re for.

See more in Antique Gadgets or under Vintage & Retro. November, 2011.