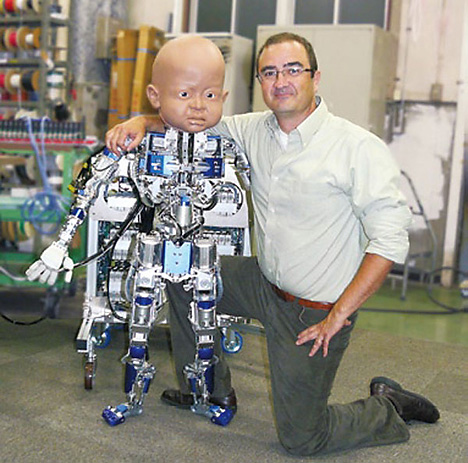 Understanding how babies develop is an important part of understanding how the human brain works. The quest to explore the development of children led researchers at the University of California, San Diego to build this utterly terrifying baby robot. In cooperation with Japanese robotics firm Kokoro Co., Ltd., the team constructed this rather complicated machine that is meant to mimic the actions of a one-year-old human child. Unfortunately, they decided to give it a creepy rubber face and no skin on the rest of its body, so it looks much more like a nightmare than a child. 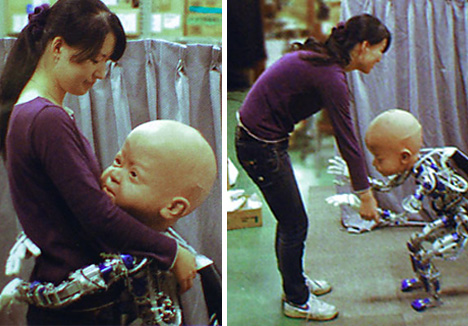 The robot, named Diego-san, has over 60 moving parts in its body. Its five-fingered hands are able to grasp objects, and the robot can even stand up from a sitting (in a chair) position. The head contains more than 20 moving parts that allow Diego-san to create facial expressions. The head also contains high-res cameras in the eyes, a speaker in the mouth, and accelerometers in the ears that detect the robot’s movement and position. 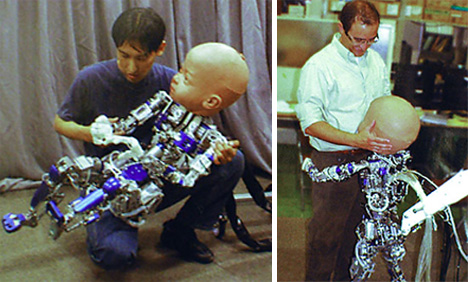 In addition to helping researchers understand how babies acquire motor skills in the first year of life, Diego-san will impart important clues about how babies learn various facial expressions and interact with their immediate environment. While all of this research will undoubtedly lead to some important discoveries, we can’t help but think that one day, this thing will have a massive fit and destroy the lab and everyone in it. Godspeed, you foolish, foolish researchers.

See more in Robotics or under Technology. January, 2010.