10,000+ Subscribers
Wacky Musical Jell-O is a Brilliant Creation From France 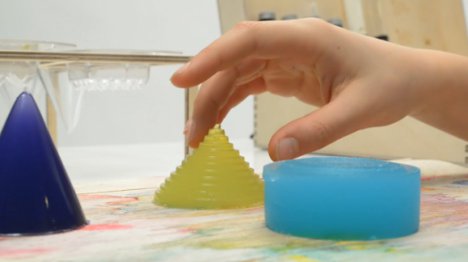 People who say that you can find music in everyday things are usually talking about rain and leaves and whatnot. But a creative bunch of French students recently found music in a mess of electronics…and Jell-O. It isn’t really Jell-O – it’s more like agar agar, water and food coloring placed onto a capacitive sensor. When the molded shapes are touched, they make sounds that are surprisingly musical.

Called Noisy Jelly, the project is referred to as a “game” by its creators. It isn’t clear if they mean it is a board game with a clear goal or if it is simply meant as a fascinating plaything. Either way, the people who got to try it out in the video look like they enjoyed the experience immensely – and they made some pretty funky songs with the capacitive jelly.

See more in Art of Tech or under Technology. April, 2012.