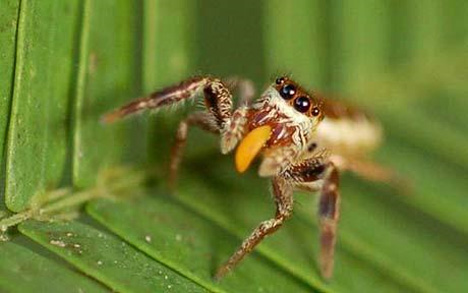 Spiders are known as vicious predators. They have a voracious appetite for insects and even other spiders, and they spend most of their lives just looking for food to ensnare and devour. But one Central American spider has a rather more laid back life, which it spends lounging in acacia trees and dining on stolen vegetarian fare. The Bagheera kiplingi is the only known (mostly) vegetarian spider. 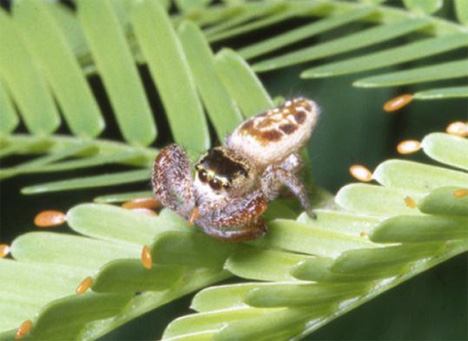 A well-documented symbiotic relationship between acacia trees and a certain species of ant produces tiny, protein-rich nubs at the end of the acacia leaves call Beltian bodies. The ants eat these tasty buds, and in return they guard the trees from leaf-eating insects. But Bagheera kiplingi have a taste for the Beltian bodies as well, and they go to great lengths to steal them from the guardian ants. Being a type of jumping spider, the B. kiplingi often employ their powerful legs to jump away from the ants if they are spotted, but they have also been known to hide by dangling on a line of silk until an ant patrol has passed. 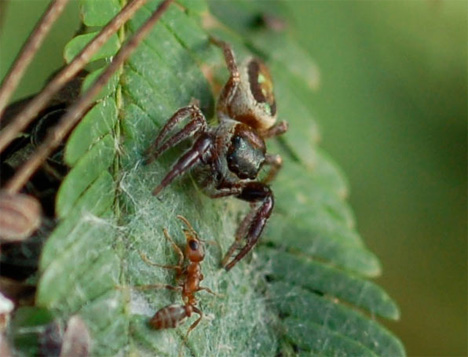 While over 90% of the B. kiplingi’s diet is vegetarian, they do occasionally dine on ant larvae or other B. kiplingi. When their body composition was studied by Christopher Meehan of Villanova University, the spiders’ chemical composition indicated a predominantly vegetarian diet, confirming scientists’ observations. Even more interesting is the fact that scientists had been observing the relationship between the acacia trees and their guardian ants for years, but none had noticed the spiders that also benefit from the relationship. It took a group of student naturalists to notice the spiders and bring them to the world’s attention. 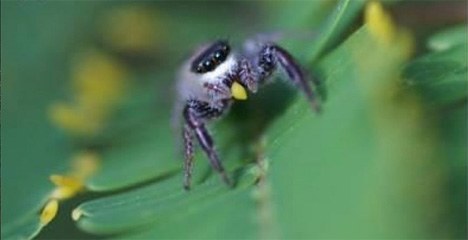 What’s most remarkable about the spiders’ diet is that it has long been thought that spider anatomy wouldn’t allow for a high-fiber diet. They digest their food externally by liquidizing it with digestive juices before slurping it up. Just how the B. kiplingi deals with its mostly-vegetarian menu is still being investigated. And with all of the free time the spiders have – since they’re not building webs to trap prey – they build elaborate nests for their young, where even the male of the species pitches in to help with family duties. This trait is another that’s completely unprecedented in the world of spiders. The B. kiplingi is one unique little arachnid.

See more in Earth & Nature or under Science. November, 2009.