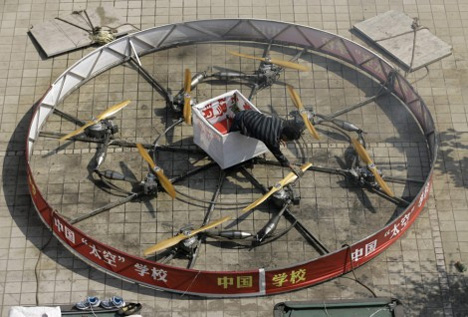 Ordinarily we’re big fans of insane ideas that may very well result in someone being hilariously maimed. But this Octocopter, built by a visionary/crazy Chinese tinkerer, pushes our fan-dom to its absolute limits. This beast, were it to ever actually get off of the ground, might be the most dangerous DIY project the world has ever seen.

We don’t understand exactly what the guy is saying in the video, but luckily he is also speaking the international language of geek. Using eight motorcycle engines and attaching a dedicated wooden propeller to each, he built a strange, really loud flying machine that doesn’t quite fly. But apparently he is still working out the kinks, so keep watching the skies. Seriously, watch out for this thing: eight uncovered propellers = flying red ring of death.

See more in Mods & Custom or under Transportation. September, 2011.