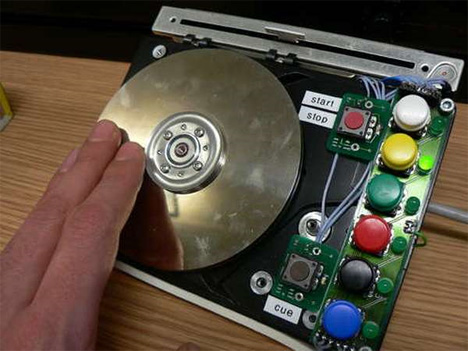 DJs are often people of the music-nerd persuasion, but this is easily the geekiest DIY DJ project we’ve ever seen. It’s an input device made from an old hard drive that, according to its creators, allows an aspiring mix-master to prepare up to six tracks at once and perform mixes with up to three of those tracks at once. The goal of Hans Gellersen, Matt Jervis, Alexander Lang, and Nicholas Villar was to create a DJ interface that was intuitive, easy to use, and provided a DJ with plenty of mixing choices.

The result was this hard drive-turned-turntable (the “HDDJ”)that provides an old-school tactile satisfaction with its easily turnable disc. Using a programmable microcontroller, some op amps, and some resistors, they turned this otherwise-wasted hard drive into a smooth new input device. It’s surprisingly well-equipped, with a motorized playback-speed slider and color-coded track selection buttons. If you’re itching to build it yourself, the team has full instructions for the project over at Instructables. But if you’re really nerdy, you’ll go read their whole university paper (PDF), complete with philosophy and future plans. Sadly, there are no performance videos yet, but the video above gives a rough idea of how the input works.