10,000+ Subscribers
There and Back Again: A Visual Guide to Every Mars Mission

Since the 1950s, humans have been sending spacecraft, animals and ourselves into space in an effort to understand our universe. Not surprisingly, a lot of our space exploration has involved checking out the other planets in our solar system. Mars has been of particular interest, partially because it’s so close, but lately because we’ve seen some evidence of life-supporting potential there. We’ve sent so many missions to Mars, in fact, that Bryan Christie Design put together a beautiful infographic to help us keep track of them all. (Click the picture below to see a full-size version.) 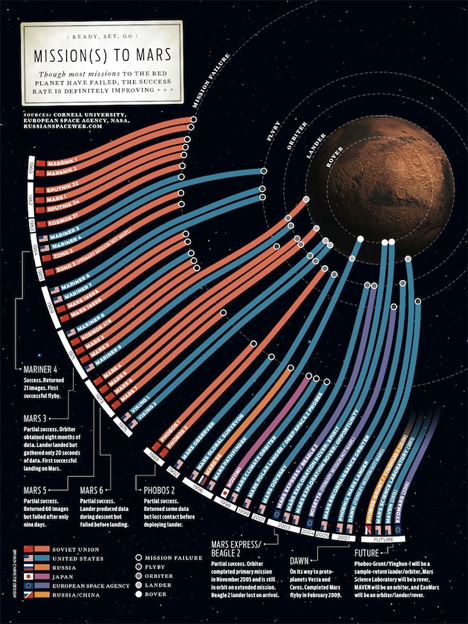 Some of these missions have been successful, and some never reached their destination. And although any space mission is still somewhat risky, we’ve gotten considerably better at completing missions successfully. Just in the last decade, the success rate has increased significantly. (It should be noted that the Russian Phobos-Grunt expedition which was planned for 2009 has been delayed until 2011.) Future missions to the red planet will continue to provide even more useful information about one of our closest neighbors…and maybe one day we’ll get to see it for ourselves.