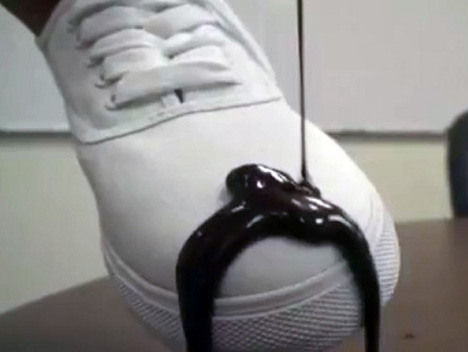 We know a few people whose laundry-washing other halves have forbidden them from ever wearing white clothes again thanks to their epic clumsiness. But a product called NeverWet might change that. The superhydrophobic spray repels water so effectively that liquid basically jumps right off of surfaces treated with the spray. Not just water, either: oil, ketchup, chocolate syrup and basically everything else just won’t stay in contact with it. The video below is so amazing that we’ll just shut up for a minute and let you take it all in.

Awesome, right? NeverWet apparently does more than just cool party tricks like letting chocolate syrup roll off of your tennis shoes, too. According to the company that makes it, the coating can keep siding clean and machinery rust-free, repel ice from outdoor surfaces and keep bacteria from gathering in your bathroom. The stuff keeps a toilet plunger from getting toilet water on it!

The superhydrophobic (meaning really, really repulsive to water) coating was discovered when Ross Technology was looking for a product that would reduce corrosion on steel parts. Their chief scientist went to work and created a coating so slick that you can spray it onto basically anything and it’ll keep moisture, ice, dirt and bacteria off. According to the president of Ross Technology, he coated his iPhone with NeverWet and submerged it in water for 30 minutes, then pulled it out to find it worked just fine. We wouldn’t suggest trying that one yourself, but we’re definitely going to pick up a can of this stuff when it becomes available in 2012 and spray it on everything.

See more in New Materials or under Science. December, 2011.