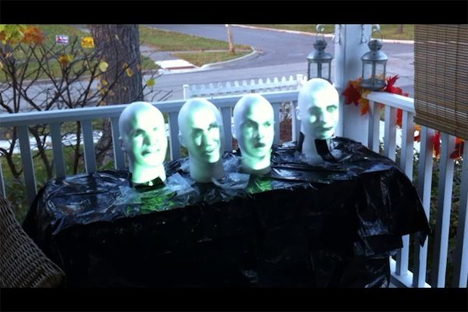 The right Halloween decor can make or break your whole holiday, and Instructables user TheNewHobbyist has created the pitch perfect Halloween display. Using styrofoam heads, and Arduino UNO, a karaoke machine, projector, and a few other bits and bobs, the creative tinkerer built a quartet of singing busts for the Halloween porch.

TheNewHobbyist modeled the project after the crowd-pleasing Haunted Mansion ride at Disneyland/Disneyworld. The display consists of four heads that sit on a table and sing a spooky song when the display is tripped by an industrial photocell switch. The projected images came from a YouTube video of four singing heads that, when projected to line up perfectly with the styrofoam heads, seem to create life-like decapitated minstrels.

In the Instructables explanation, TheNewHobbyist explains that having a mechanical engineer as a father was a big help in creating the creepy display. The effect is surprisingly realistic; the projected faces and recorded music really make the faces look like they’re singing and are sure to freak out all of the unsuspecting trick-or-treaters who come by looking for candy. Hop on over to Instructables for the technical specs and instructions to make your very own haunted Halloween display.

See more in Do It Yourself or under Technology. October, 2014.