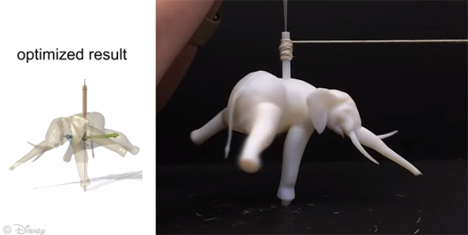 If you know anything about physics, you already know why spinning tops come in conical or pointed spheroid shapes: in order to spin, they have to have a precise center of gravity and moment of inertia. Tops have been used for several thousand years and no one has really played with their shape or function much until now. Disney researchers have used 3D printing and some fancy physics to make just about any shape into a well-spinning top.

By selectively changing the amount of mass contained in different parts of 3D printed figures, the researchers were able to change the objects’ moment of inertia. This partial hollowing of the shapes allows the unusual shapes to easily spin just like a traditional top. Even a very asymmetric shape like the armadillo above can do some impressive moves once its weight has been distributed in all the right places.

Some shapes weren’t able to be optimized for spinning even with selective hollowing; in those cases, the Disney folks added metal to the interior of the shapes to give them the proper balance they needed to spin. The researchers also made yo-yos in unusual shapes using the same method. Like tops, yo-yos typically need to be round and smooth in order to move up and down on their strings. But in the Disney project, even a cuboid yo-yo works normally.

See more in Weird Science or under Science. October, 2014.