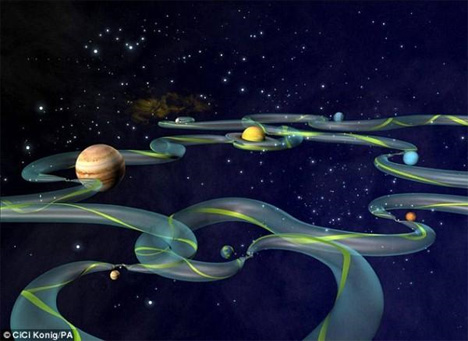 Space travel is expensive, and part of the reason for that is the cost of fuel. Spacecraft need a lot of it to overcome Earth’s gravity and even more to propel themselves past other moons and planets. But scientists think they can map out a way to take advantage of the “gravitational corridors” that surround planetary bodies. Here on Earth, we’re accustomed to falling downward due to the planet’s gravitational pull. In space, gravity works a little differently. A spacecraft would “fall” along one of these corridors toward the orbit of the nearest planetary body. In these artist’s renderings, the space highway is illustrated as being long tubes winding around planetary bodies. 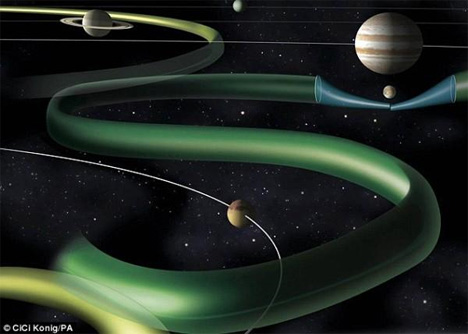 A similar idea has been used in space travel for years: the “slingshot” method. However, the slingshot method doesn’t involve the spacecraft actually entering the orbit of a planetary body, while the space corridor method does. This method of space travel could cut down on the required amount of fuel by as much as tenfold, but it would require a lot more time than our current methods. And because fuel would still be needed for course correction and for filling in the neutral gravitational areas, it’s not likely we’ll ever see fuel-free space travel. Still, the idea of drastically reducing the amount of fuel needed for space missions is appealing enough to scientists that they are devoting time to creating a map of usable space highways for future missions.