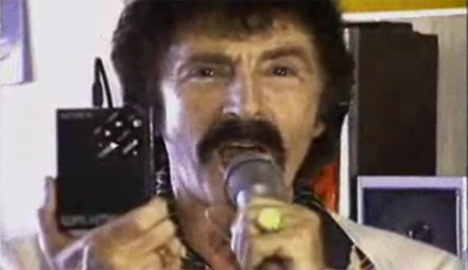 If you grew up around Tulsa, Oklahoma in the 1970s or 1980s, this face might look strangely familiar. It’s Joe Pierre, the owner of SEVCO, a Tulsa electronics store. He was the talent in his store’s commercials for many years, giving the TV spots quite a unique personality of their own. The commercial below is from around 1982, when a shipment of Sony Walkman cassette players was cause for excitement. Bonus: there’s a wall of huge 80s gadgets in the background!

While on the surface it’s a funny commercial with a weird salesman, this video is also a reminder of an era that’s gone forever – one before small local electronics stores were pushed out of the market by the big-box stores most of us shop in today. After Sony’s recent decision to retire the cassette Walkman in Japan (they’re still being produced in China for the U.S. and U.K. markets), relics like this commercial will soon be all we’ll have left of the iconic portable cassette players. Sony – no baloney!