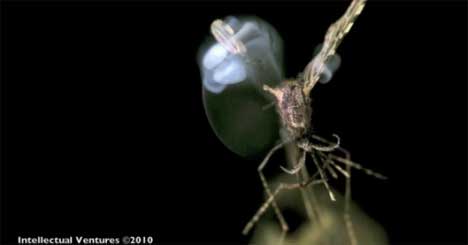 In the fight against malaria, plenty of kooky ideas have been proposed. This one wins the prize for over-the-top craziness, hands-down. Former Microsoft CTO Nathan Myhrvold and his company Intellectual Ventures Laboratory think, for some reason, that shooting mosquitoes down with lasers might be a good way to combat the devastating disease. While previous attempts to control malaria haven’t been as successful as one might hope, Myhrvold and cohorts have been developing this method in a bid to control the mosquitoes that carry the disease.

They displayed the method at the Technology, Entertainment and Design 2010 conference, using a green laser pointer instead of real lasers for safety. But the above video shows the real deal: mosquitoes being zapped and killed by lasers mid-flight. The proposed device would create a sort of laser fence around an area, and zap any mosquitoes who cross it. The prototype was, interestingly enough, built with parts purchased on eBay. While shooting poor little skeeters in the air might be therapeutic and kind of fun, we can’t imagine that it would be entirely safe for any humans who might be around. But then again, maybe the danger is part of the fun.

See more in Weird Science or under Science. February, 2010.