So tiny it can fit on the tip of your finger, this remarkably agile and multifunctional little bot assembles not only assembles itself but also goes on to dive underwater, carry objects twice its weight, burrows into the ground and then degrades on demand, leaving only a magnet in its wake.

A just under two square centimeters, the Untethered Miniature Origami Robot is powered by a neodymium magnet and two pairs of electromagnetic coils that in turn create magnetic fields aiding the robot’s movements and transformations. Indeed, the magnet is not even dragging the robot around, but rather working with momentum and asymmetries to ‘walk’ the legs and create other actions from gravitational imbalances. 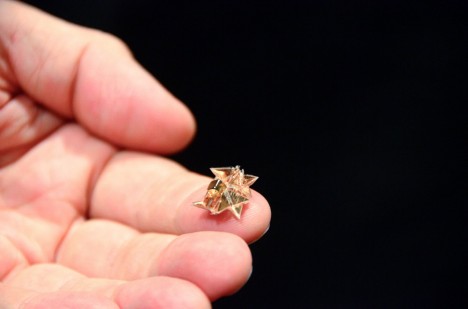 As such devices become ever smaller, as well as increasingly programmable and autonomous, there are many potential applications, including ultra-small medical devices that can target cancer cells or clean clogged arteries within the human body. 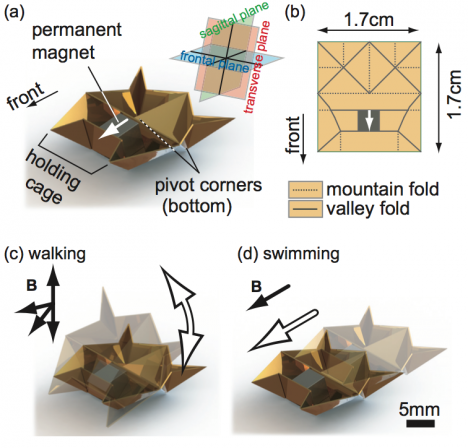 Via Spectrum: “From a flat sheet with a magnet on it, their robot folds itself up in just a few seconds, is immediately ready to zip around on land or water driven by magnetic fields, and then when you’ve run out of things to do with it, drive it into a tank of acetone and it’ll dissolve. This is the first time that a robot has been able to demonstrate a complete life cycle like this. The other advantages of using a folded robot instead of just a magnet include the ability to float, as well as the ability to more efficiently perform tasks like moving objects or digging. And this isn’t the only design that you can use, of course: you can optimize for whatever task you’re trying to accomplish. This particular one is more of a generalist.”

See more in Robotics or under Technology. June, 2015.