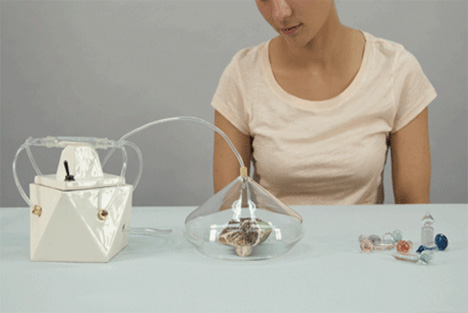 Scent is the sense most closely tied to memory. When you catch a whiff of your mother’s perfume or the cigars your grandfather used to smoke, you’re instantly transported to a different time and place. We use photographs to record the visuals we want to preserve, but so far there has been no way to preserve aromas for future enjoyment. Amy Radcliffe created the Madeleine, a “scent camera,” to preserve those meaningful scents in the same way that we instantly and constantly record images.

The “scentography” camera works by placing a glass funnel over the object you’d like to record. A pump sucks the air across an odor trap which absorbs the particles that the smell is composed of. The apparatus, which looks like a retro science kit, is like a giant nose, according to Radcliffe. She envisions people capturing aromas at home and taking them to labs to be processed, kind of like we used to do for photographs. Instead of pictures, however, users would get a small vial of the precise odor along with a bronze disk listing the precise formula.

See more in Industrial Design or under Technology. July, 2013.