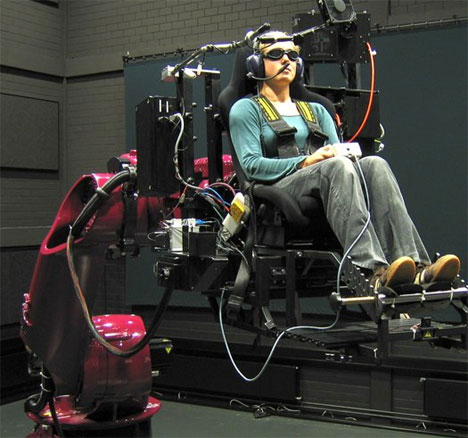 Scientists have had all of us fooled for years; we think of them as nerds in lab coats who spend long hours hunched over beakers and lab rats, trying to figure out the mundane mysteries of the universe. But what they’re actually doing behind closed doors – at least at the Max Planck Institute for Biological Cybernetics – is playing with robots and creating real-life video games. No fair!

A group of researchers at the Max Planck Institute wanted to study the way humans perceive motion, and they figured the best way to do that would be to create a realistic F1 racing simulation. They used a modified Robocoaster, a robotic arm often seen in amusement parks that can lift up to 500 kg. As the player turns the wheel of the car in the game, the robotic arm moves the driver’s seat in a realistic driving-type motion. As it turns out, the robotic arm plus the video game make for a pretty rad-looking research project – one that can actually help scientists understand how the human brain processes the sensation of motion.