10,000+ Subscribers
Presto! Hubless Bike Folds Down to Fit Into Your Backpack 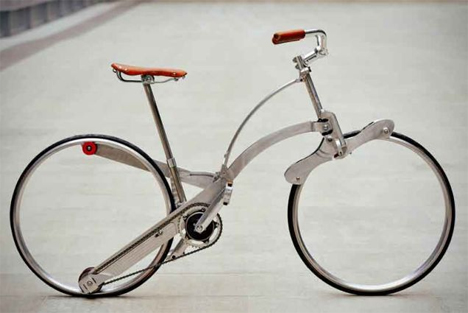 Folding bikes are old news by now, with clever new designs popping up every few weeks or so. But the Sada Bike is a little different in that its folded state is almost impossibly tiny. After folding it with one smooth motion, it’s about the size of an umbrella, small enough to fit into a backpack. 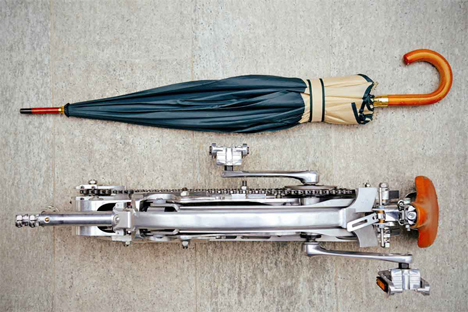 The whole “size of an umbrella” thing only applies to the frame, of course – the 26″ wheels come off and have to be transported separately. But since they’re hubless and essentially just circles of metal and rubber, they should be easy enough to carry up to your apartment or office.

Folding bikes typically experience performance issues because their parts have to be smaller and less powerful than traditional designs. The Sada addresses some of those concerns by using a full-size frame and wheels, but the tires may prove to be its achilles’ heel. Traditional bike tires distribute weight throughout the tires’ spokes, but on a spoke-free wheel the weight has to be carried in the outside of the wheel. That will unavoidably make the bike harder to propel forward. 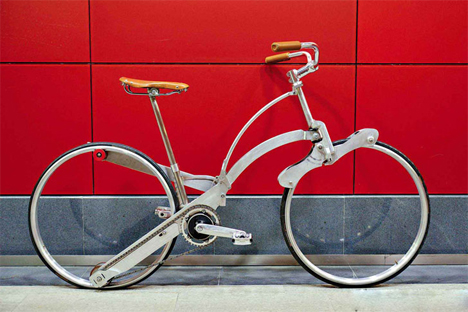 The Sada Bike is meant to be a commuting cycle, so perhaps the wheel issue won’t be too bothersome considering the short distances the bike is meant to travel. The bike is still in the prototype stage currently, with the inventor looking for financial backing to put it into production. It’s a good-looking bike that we wouldn’t mind taking for a spin, wheel issue or no wheel issue.

See more in Bikes & Cycles or under Transportation. September, 2014.