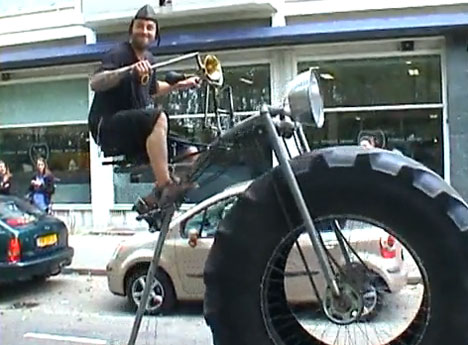 Are you tired of people making fun of your puny little bike? No one would dare mock your ride if you showed up riding this insane Monsterbike. The crazy invention features a monster truck tire on the front, two tiny wheels on the back, and a dizzyingly high seat.

The bizarre bike towers over the motorized vehicles and the other bikes in its vicinity; it’s likely the only bicycle in the world capable of intimidating SUV drivers. In a way it’s almost a throwback to the big-front-wheeled penny-farthing bicycles of the 19th century, but this monster looks way difficult to ride. 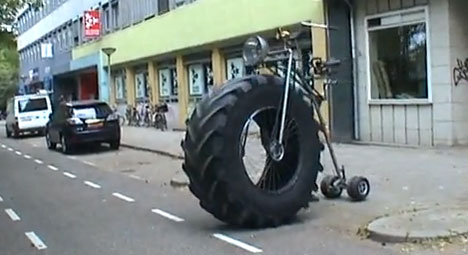 It’s not clear exactly where the video was shot, but if you’re ever wandering the streets of any European city and you hear the throaty sound of the Monsterbike’s horn, you’d better get out of the way. It might be hard to pedal, but it could probably roll right over pedestrians with little more than a bump.

See more in Mods & Custom or under Transportation. June, 2010.