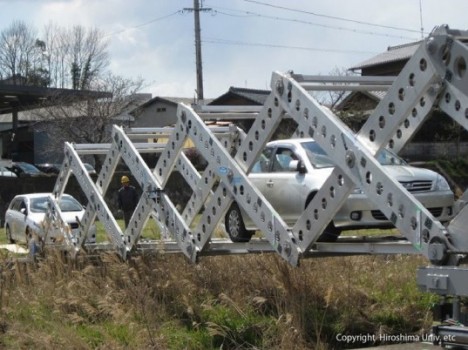 Developed by engineers at Hiroshima University in Japan, this mobile folding ‘scissor bridge’ platform can carry people, cars and supplies across gaps in emergencies, like earthquakes, for instances, for which its country of origin is all too well known.

Designed for portability and inspired by origami, the steel structure can be deployed to help deal with landslides and floods that wipe out area bridges, or new voids that form when the ground shifts. The entire system fits on the back of a typical flatbed truck, able to make its way along conventional roads with typical size and span limitations. Its creators claim it is  “the world’s fastest, largest, strongest, and lightest expanding temporary bridge.” 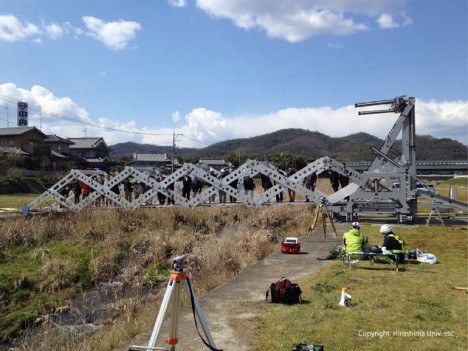 Dr. Ichiro Ario and his team created the Mobile Bridge Version 4.0 as a prototype, but even this draft version is fully functional and able to unfold and refold in less than 5 minutes (though setting it up still takes a full half hour). While it could be a boon in emergency situations, the same system could be used to temporarily replace or work around bridges that are being repaired or rebuilt as well. As compact and efficient as the current design already is, no doubt additional iterations will also help improve it on all fronts.

See more in Mass Transit or under Transportation. November, 2015.