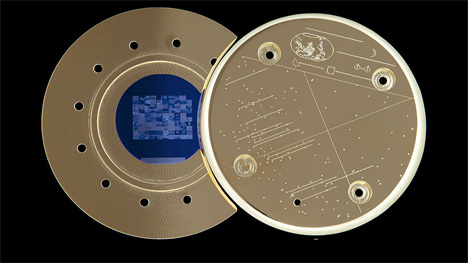 If you had to choose a picture that represents humanity to be eternally preserved, what would it be? Most likely it would be one of heartbreak, joy, devastation, awe or triumph. One man has spent five years examining this idea, and he has launched humanity’s best into space.

Trevor Paglen chose 100 images to represent humanity in his project The Last Pictures . They range from a photograph of ancient cave drawings to one of a massive dust storm. Whatever the subject, they’ve all been made digital.

Working with materials scientists at MIT, Paglen created an archive that could last billions of years. The pictures were engrained in an eternal-lasting disc that is encased in a gold-plated shell. The shell was launched in November 2012 along with the Echostar XVI communications satellite, which will orbit the earth forever. In geostationary orbit, no one can hear your existence.