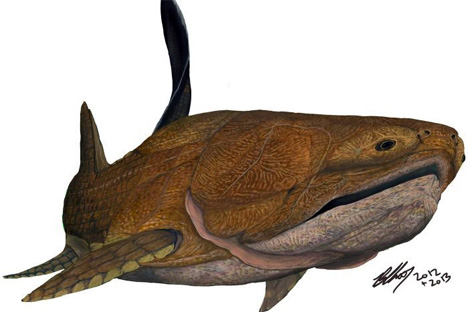 In southwest China, a small suburb has become the hub of aquatic evolution. A 419-year-old fossil of a fish with a discernible jaw was discovered and is being called a ‘missing link’ in the evolutionary process. The giant, armored fossil of the Entelognathus is thought to be the earliest example of a recognizable jaw in a fish species. A member of the Placodermi, this armored class of sea dwellers was thought to have died out, resulting in a mysterious gap in fish evolution.

The Entelognathus is quite literally a missing link – Placodermi died out, leaving a huge gap between them and the fish we know today. This new discovery gives validation to 30,000 species of fish that were once in evolutionary limbo. “This is a huge discovery for science, not just palaeontology,” said Flinders University Professor John Long. “I think a lot more searching needs to be done and we could find the answers to some of these really big questions right here in our own country.”